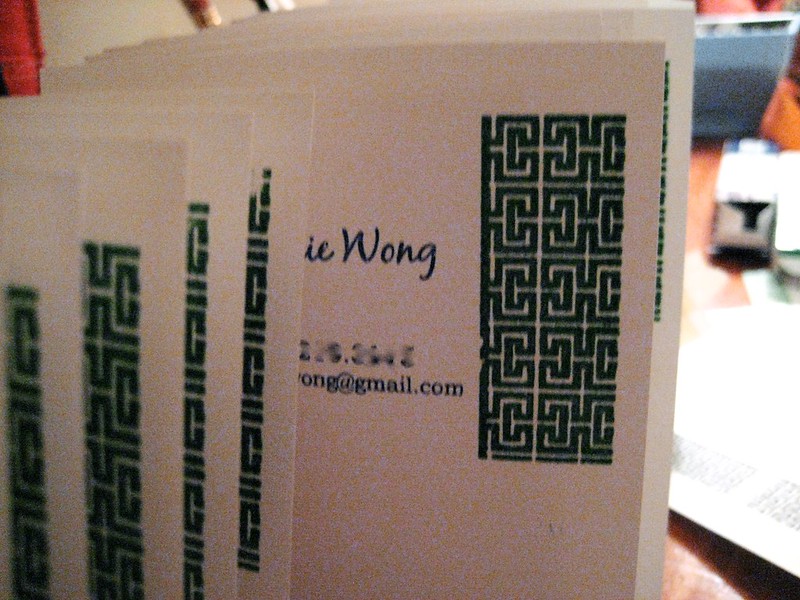 I’m not going to pretend here that I’m an expert in Print Gocco, but I love using it and I feel like spreading the love today.  I bought my Print Gocco from a woman named Marlene Watson, and when my machine arrived, she thoughtfully included with it a helpful instructional DVD that alternately had me giggling and shaking my head, because she is so, so incredibly from another time and we are so, so using the Gocco for very different reasons.  Case in point: her featured project in the DVD focused on Gocco printing a cotton necktie for her nephew.  Um, no thanks.

In a nutshell, a Print Gocco works like this:
Draw a design. Using a carbon-based pen or the computer, make a black-and-white version of whatever you want to print.  As I’m not a graphic artist, or a computer expert, I use the “draw” function in Microsoft Word.  To my artistic, craftier friends, I bet I just ran proverbial fingernails down a chalkboard, because you’re supposed to use Adobe Illustrator or Photoshop, neither of which I own or am willing to outlay the cash for right now. If you want to use clipart, a Google image search usually produces some decent clipart of what you might be looking for.  One of my favorite places to look for accents is Briarpress.  For example, say that my project is making stationery for someone I want to be my friend.  I decide I am going to make her some personalized stationery, so I design this:

Print your design on a carbon-based printer.  I know, what.  You have to print to print?  Yup, just like refried beans or twice-baked potatoes, this is a two-step print process.  Print your design using a laser printer onto plain, non-recycled paper. Recycled paper works, too, but for whatever reason I’ve found that Gocco likes non-recycled better, which is just great because, you know, paper grows on trees and there’s plenty of those to go around.  If you don’t have a laser printer, you can print it out on your inkjet and then Xerox your printed copy.  I know, the amount of printing to get to the big show is absolutely nuts.  Or, you can circumvent all of this crazy printing-then-copying business if you have a HP printer.
Whoa now, Biscuitwheels, you’re saying.  You’re making these rules up.  No, I’m not.  HP printers use ink cartridges that have carbon in them, and carbon is the crazy science behind the whole technology of Gocco.  So you either “acquire” the carbon in your design by laser, Xerox, or, oddly enough, an HP printer.
Burn the image.  This is the part that is crazy.  After loading a screen into the lid of the Gocco, you burn an image onto the screen using the machine.  Basically, the Gocco has two bulbs in the lid that supposedly contain enough carcinogens in them to cause the state of California to cause them to require that the bulbs be labeled as such (but crazy, spendy rules like these are also probably why California is going to have to close).  You put your design on this sticky pad, close the lid, cover your tender parts, say a hail mary, and press down.  The bulb flashes.  You open the lid, and you have a screen with your image on it.
Ink the screen.  See below: 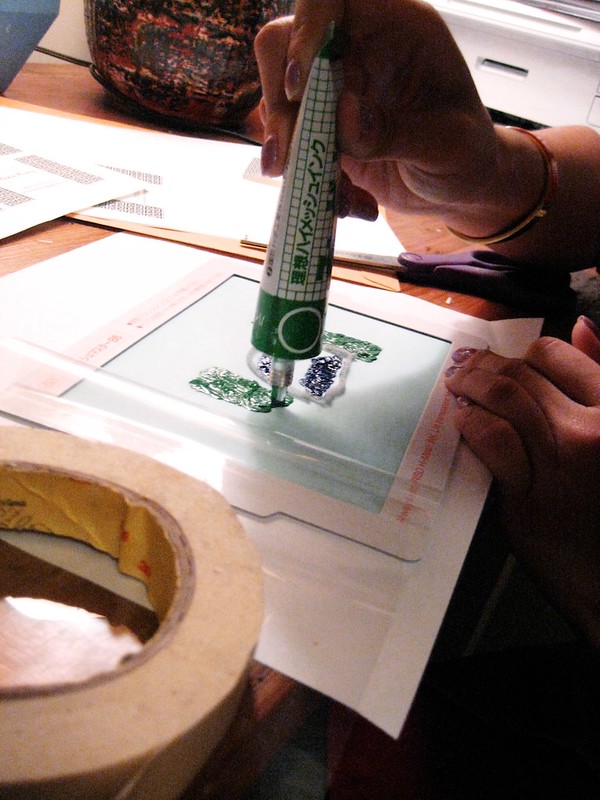 Gocco comes with oil-based inks that you apply to the screen, and the inks get pushed through the image on the screen as you press down on the lid to make your prints.
Print your image.
I know I’ve left out some steps, but I wanted to give you a general overview so you can decide yourself whether Gocco could be your thing.  For a more complete overview, here’s a helpful video. Personally, I love my machine, but the pictures I’ve showed you above are of some calling cards I made for a friend that were, to date, my biggest Gocco failure.  We spent hours trying to fix it, to no avail.
Other things to note: there’s a machine similar to Gocco called the Yudu, which looks awesome mainly because it’s not discontinued like the Gocco, but from what I can tell, you can only print one color at a time, which means a lot of screens and potentially a lot more time.  Plus, the machine looks massive, and I’m not sure how you’d make it blend into your home decor.  A Yudu koozie, perhaps?  But if you do buy one, will you let me come over to your house and try it?  Cool, thanks.
Also, if you’re seriously looking into buying a Gocco, check Ebay, where my sister successfully acquired hers.

welcome to grits & chopsticks!
Kitchen Renovation: How Hardware Can Change Everything
new home update: coming up for air