Having bun cha in Hanoi is like eating a slice of pizza in New York: it doesn’t get any more quintessential than this.  The thing I’ve come to really love about Vietnamese food is that it usually involves a combination of a rice noodle or crepe, fresh greens, and some sort of meat.  Bun cha encapsulates all three, and adds a smorgasbord of grilled meats, the main feature of which is pork patties, to boot.

Getting a good bowl of bun cha was on my list as soon as our plane’s wheels touched down on Vietnamese soil, and the hubby and I darted to Bun Cha Dac Kim on our first day, within hours of arriving.  Bun Cha Dac Kim is known not only for its stellar bun cha but also for its amazing nem cua be (crab spring rolls, which I blogged about earlier here).   But something was off.  There were piles of thousands, and I do mean thousands, of nem cua be on giant platters outside, but from what we could tell, no one was eating there.  If it’s one thing that puts the hubby and me off from eating somewhere, it’s the lack of customers.  (As a sidenote, a lack of local customers and an abundance of foreign tourists can also mean something is fishy.  As in, it’s a Mexican restaurant — yes, those exist here in Asia, but most of them are frighteningly awful, for obvious reasons.)

The exterior of Bun Cha Dac Kim; note all the dishwashing takes place on the ground floor and overflows onto the sidewalk, as necessary

So we passed on Bun Cha Dac Kim.  I was sad to do it, but the hubby and I have lived in Southeast Asia long enough now to trust our instincts.  We spent the next two days passing over a few other bun cha establishments for various reasons (one had too many tables, which meant that the quality control might be suspect, another moved locations and we weren’t sure of the new address, one was closed for business permanently, and one didn’t even serve bun cha).  I started getting nervous by the afternoon of our second-to-last day in Hanoi.  It was unthinkable to me that I’d leave Hanoi without a bowl of the tasty stuff to wrap my soul around, and yet, here we were, with less than 12 hours remaining, and time was ticking.

By evening, my concern had blossomed into full-on eye twitching panic, and so the hubby, the Gravy Baby and I put our heads together and decided to give Bun Cha Dac Kim another go.  After all, we’d last visited Bun Cha Dac Kim at 4:00 in the afternoon, which hardly was a mealtime by anyone’s standards.  Perhaps we’d made an incorrect judgment. 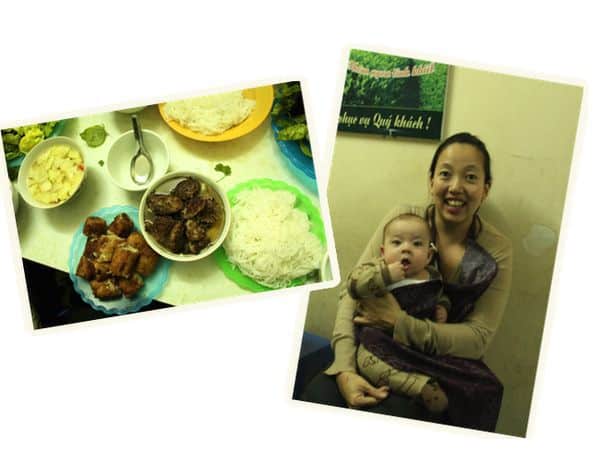 Left: the bun cha and all its accompaniments; above, right: the Gravy Baby enjoys watching the shenanigans of his parents and their desperate search for bun cha — at least, that’s what we think

Boy, am I glad we did.  It turns out that like other old establishments in Hanoi, what we’d seen was only the ground floor of the establishment, which was their dishwashing/dish preparation area.  The restaurant was actually five stories, with each story consisting of one room and a spattering of card tables.  We climbed three flights of rickety spiral stairs, wide enough for only one person at a time, and landed in a dimly-lit room, sharing a table with a Vietnamese couple clearly on a date.  I’m not sure that our arrival — with the Gravy Baby, a giant backpack, and my humongous camera, did to make romance happen that night.

*Note: be sure to arrive during dinner hours between 6-8 pm.  By the time we finished dinner around 7:30pm, the place was already winding down for the night.  Talk about efficiency.