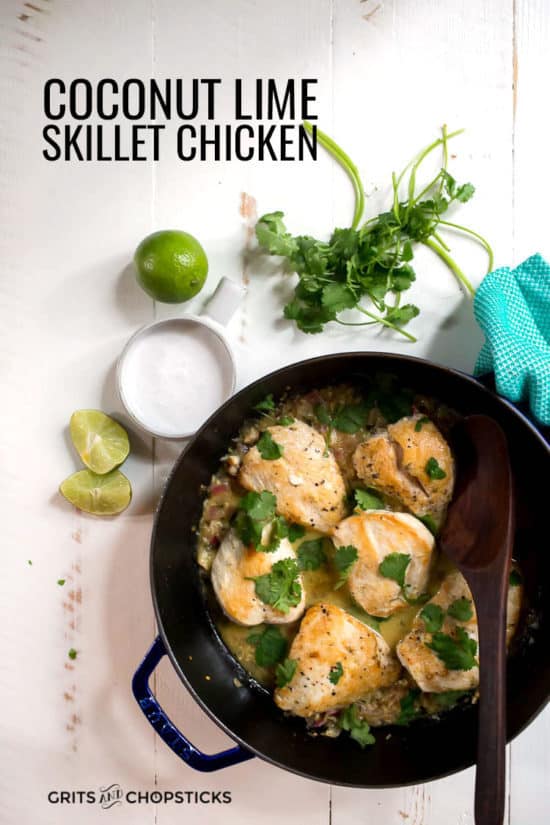 Happy Monday, cats! I’m going big in the fusion recipe department today with this coconut lime skillet chicken. It’s another Asian-influenced recipe with a Southern twist. There’s a Southeast Asian swirl of lime, cilantro and coconut milk, but the chicken breasts are pan-fried in a cast iron skillet. Chinese people do not eat entire hunks of chicken breast. It’s like a New Yorker eating pizza with a fork. It’s just not done.

I, for one, love pan-fried chicken breasts. I think that browning chicken breast in a cast iron pan that’s shimmering with oil is pretty much the best way to make chicken breast in a hurry and to keep it juicy. For this recipe, I add splashes of fresh lime juice, cilantro and creamy coconut milk to mix in with the pan juices of the chicken for a heavenly sauce. The best part of this recipe is that you can easily make it Whole30/paleo too (click here for an explanation of what Whole30 is and here for the lowdown on paleo diets)!

What I love about this skillet chicken, which was inspired by this recipe from Sally’s Baking Addiction, is that it’s creamy without being too rich. The acidity in the lime and the freshness of the cilantro keep the whole dish feeling light and just ever-so-influenced by Asian flavors. We had our skillet chicken with a simple side salad and mashed potatoes for a filling, easy weeknight meal.

When it came time for my kids to try the coconut lime skillet chicken, Meimei wasn’t impressed by my liberal use of what she calls “green stuff.” While she’ll eat broccoli, lettuce and cucumbers with aplomb, she’s completely anti-herb. Luckily, I’d anticipated this outright rejection, so I skipped the cilantro in this recipe until the very end and had spooned out a portion of chicken for her before garnishing it with the dreaded leaf. I’d advise you to do the same if you’re dealing with a little dictator in your house.

After all, we all know that cilantro is Kryptonite for toddlers.